Biryani is a spicy rice dish commonly made with meat or vegetables. It is common in India, in particular the Hyderabadi province, which is famous for its biryani. The origins of this dish are hotly debated but one thing is certain, this dish is well loved, with each province claiming their own variation on this classic. The influence of the dish has also spread to India’s neighbours, and is common in places such as Pakistan and Mauritius.

This is a true celebration dish and its preparation lends itself to producing large quantities for a hungry throng. The rice and meat are typically cooked separately and then layered together, melding and fusing flavours to create a pot of deliciousness. Basmati rice is considered the best for the dish, due to it being a long grained rice. Ghee is used for frying the meat and spices to produce an authentic flavour. The separate cooking of the ingredients is one of the true distinctions between a biryani and a pulao, another popular meat and rice dish.

Biryani also tends to have stronger and bolder spice mixes including nutmeg, mace, pepper, cloves, cinnamon, cardamon, coriander, bay leaves, mint, ginger, onions and garlic. Fancy versions will also include saffron. Creaminess can be added to the dish in the form of coconut milk, cream, yoghurt or buttermilk depending on the region. The heat of the final dish is typically tempered by the addition of raita (yoghurt sauce) and a fresh salad.

If you are keen to try this dish it is now available at Hometaste. Moona and Nida offer an Indian chicken biryani with a mint raita. Priscilla offers a Mauritian vegetarian biryani with a spicy chutney and a salad. 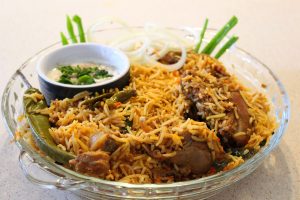