I am married to a self confessed computer nerd. He doesn’t care much for tourist sites but there was one place on his list of things to do, a visit to Bletchley Park. Bletchley Park is an estate where the computer was invented. It is also ridiculously pretty so it has appeal to those of us less computer obsessed. Any history buff will also get a lot out of it. We booked our tour with Special Group Tours and luckily no-one else booked so we had our own driver. After driving a few hours out of London we arrived to a place of nerd dreams.

The estate is made up of a number of exhibits, where you can see machinery that both the English and Germans used to encode their communications. Outside there are a series of buildings that were in use during the war. Initially the code breakers worked within the Estates mansion as part of “Captain Ridley’s Hunting Party”. Despite the size of the gorgeous manor house, things became cramped and other structures were quickly built. The cafe onsite, neighboring the house, was kinda awesome in that it served quintessentially English food. 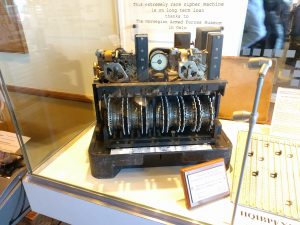 I have to admit if was pretty cool to walk in the footsteps of Turing and to enter his office. The tragedy of his persecution and subsequent death are heartbreaking and I felt conflicted about the belated hero worship. I think that pardoning him after he was dead may have been more about making everyone feel better about the way he was treated rather than honoring someone who certainly deserved it.

Lastly there is a separate computer museum behind the estate that is worth a visit. They have been rebuilding the colossus, as well as a number of historical machines, and you can even see them operating. The more modern computers were also interesting. I particularly liked the gaming room with old SEGA megadrives, Atari and Nintendo machines. Overall this was my hubbies favorite thing in England and I would recommend it to anyone with nerdy leanings.