My old boss Riko has escaped the public service bubble to chase his passions, running regional Japanese tours, as well as teaching Canberra locals how to cook ancient Japanese style. Japan is home to some of the world’s oldest people, and much has been said about how their diet contributes to their longevity. What people don’t realise is that it isn’t the modern Japanese cuisine that is causing this. You can eat all the chicken katsu and okonomiyaki you like, but it is unlikely to help you live forever, or even to the ripe old age of 100 like so many Japanese elders. 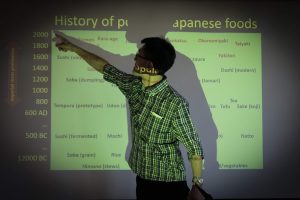 Many of the dishes we are familiar with are actually relatively modern, with some only dating back to the 20th century. This includes much of the Japanese street foods such as ramen,  katsu and ka-arage. These are dishes that are favoured, especially by the youngsters in Japanese cities, whose life expectancy is actually dropping. They are also the dishes favoured by many in the western world.

Rural Japan is a different kettle of fish, and yes, they do eat a lot of vegetables and fish. Many of the ancient eating traditions are being maintained by the ageing population and it works for them. You can see many a 70 year old still active in the fields, maintaining traditions that date back thousands of years. 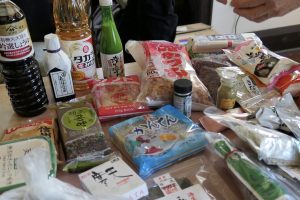 So what is their secret? Local Japanese cultural expert, Riko Hashimoto, attributes their longevity to some key principles built around “ICHI-JU SAN-SAI”; i.e. a meal consisting of rice/grains, broth and 3 small dishes. Also, meat has until recently been relatively uncommon in the Japanese diet. Buddhist traditions restricted meat eating to seafood and “lesser” land animals, and so beef was entirely absent. Ironic given the popularity of wagyu beef today.

Given this restriction, the diet required creativity to liven up the largely vegetarian dishes. There are some basic flavours and ingredients that formed the basis for many of these dishes. Dashi stock, typically made from konbu seaweed and/or bonito (fish), is almost pure umami flavour wise and super good for you too. Salty flavouring agents, such as miso and soy sauce, provide savoury notes and even more umami. Sake and mirin add sweetness to dishes. Grains and pulses help to bulk up meals, with a variety of vegetables, seafood, fruits and nuts for complete nutrition. Sansai or ‘wild vegetables’, akin to our ‘bushtucker’, are sourced from the extensive forests in the mountainous countryside of Japan.

The ancient diet was also rich in “live” foods and fermentation forms an important cornerstone of the Japanese diet. This includes fermented soy beans for miso and natto, as well as some of the tastiest pickles and relishes you will ever have. It is also oh-so-fashionable at the moment as we struggle with the effects our rich diets have on our bodies. It leads me to the conclusion that sometimes your elders do know better and if you want to have a healthy and long life, traditional Japanese cooking may help you on your way.

If you would like to learn more about traditional Japanese cuisine Riko is running local cooking classes (new classes in May), as well as private food tours of Japan, at “Deeply Regional Japan”.  Many of the pre-made ingredients you get from the supermarket have a lot of chemicals and additives and if you are trying to maximise nutrition you really need to make you own. Riko has generously shared his recipe for home-made Dashi stock below. The recipe works with both the hard ‘dashi-konbu’ and the softer ‘hayani-konbu’ varieties. Also use the coarsely shaved katsuobushi (bonito flakes) rather than the finely ground variety. For a vegetarian option, omit the bonito, and add a handful of sliced dried shiitake (preferably organic) to the soaking konbu; remove the shiitake slices before heating the konbu and liquid. 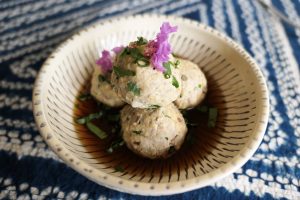