Hello hungry peoples,
I really wanted to give this blog a silly title like “Doomsday Hotdogs” but apparently that is mean to the search engines and big time food bloggers like myself can’t do such silly things. There is much talk about how Woden mall is becoming a desolate wasteland so it seems an appropriate venue for my friend’s Doomsday anthology book signing.

The lovely Kristy has written an amazing story about surviving a plague in Australia. I love it so hard. There are so many nods and winks to doomsday cliches. Watch out for the awesome zombie reference. Anyway….it is amazing and you should buy it here. It is also a bargain at only $5 on kindle.

Kristy is also an amazing baker and she catered her own book signing. That’s just the awesome kind of girl she is. Definitely one of my people. She made the most adorable on-theme lemon frosting topped cupcakes that my daughter tells me are delicious. I wasn’t allowed to bring one home for myself, only for the children. They were the cost of an afternoon out by myself. 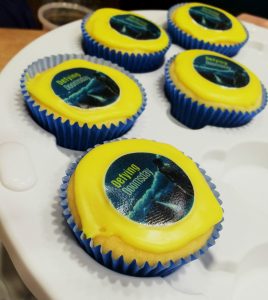 Since I was already at the mall I decided to finally visit a place that has been on my list for a long time: the Snag Stand. I am fascinated by American food. Especially as it seems to be one of the few cuisines we have ready access to in Australia. The Snag Stand specialises in gourmet hot dogs, although you can also get burgers.

Burgers I can get anywhere so it was a gourmet hot dog I wanted to get in my belly. This was a hard choice to make. Do I go for an American classic hot dog? Or one of the European versions with sauerkraut or chorizo? Or the very trendy Wagyu beef? In the end I went with a good ‘ol Chicago dog, which seems to mostly consist of layers and layers of different kinds of pickles. The bread was a highlight, being really light, fluffy and freshly baked. The frankfurt kind of reminded me of a kids birthday party but the shear array of garnishes on it did elevate it somewhat. I enjoyed it but I have to admit I didn’t finish it because I also fell pray to one of their sides: the infamous chilli cheese fries.

When I saw this on the menu I did a double take. I was not that hungry, I didn’t NEED fries on the side but I had heard so much about them and they were right there…..in front of my face. Of course I had to order them. Chilli cheese fries are ridiculous, They have more meat sauce and cheese on them than any fry really requires. My heart was palpitating as I proceeded to eat the whole thing. That ‘s the devilish thing about chilli fries, you just keep eating them until they are gone and you have to waddle home. The end.

p.s. Not really the end. I also went and saw the Bourne movie with Sophie. We snuck wine in and it was awesome. I just wanted a dramatic ending.