This has been a full on week. Not only am I still partially blind from being lasered but my furbaby had a massive heart attack. Riley is a cavoodle cross, which means she is an adorable little muppet who loves people. The poodle bit also means she is bat shit crazy. She was my first grown up pet and she endured my testing whether I had the capability to keep another thing alive before I tried it with kids. Thankfully we have remained successful. We got her to the vet in time and we then simply had to keep throwing money into the abyss until she was no longer critical.  She came home yesterday a much thinner and exhausted dog, with a mountain of medication but everyone was glad to see her fuzzy face. 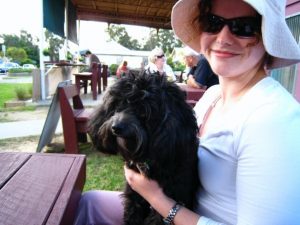 Moving onto food matters I have always been obsessed with pies topped by mashed potato. It was a weekly tradition when we went to the footie on Saturdays. In regional Australia that is just what you do. It is THE social event for the entire town. The kids that were not playing would spend the time shoving pies and redskins into their gullets as fast as possible. If I was feeling like being productive I would sit on the scoreboard. To be honest I don’t even know what kind of football they were playing…… Aussies rules maybe? Which means I must have been the worst score keeper ever. I still don’t know the rules properly.  Anyway I digress, these individual pies are perfect for kiddies and a great way of sneaking some vegetables into their diet. Get it into you!